Our commander league is planning to meet weekly and play two matches in their pods of 4. You will accumulate points towards the grand prizes. At the end of each month, the points are tallied, and the winners are declared! The Point system, rules, and Standard EDH Ban-list will be posted the week before the first event.

All participants will receive prizes for playing in the tournament. Points will also be tallied every week, and you will be able to see your standings at any time during the season.

Never played Magic: the Gathering and want to learn? No worries, We have a Level 1 Judge volunteer here who can teach you all of the basics and aid you on our path to victory. Email usonbg@uso.org for more information.

MAGIC: THE GATHERING COMMANDER (EDH) LEAGUE RULES HOW TO PLAY COMMANDER The Commander format is all about picking your hero and building a deck around them. In this casual, multiplayer format, you choose a legendary creature to serve as your commander and build the rest of your deck around their color identity. THE BASICS 1 commander card (legendary creature) 99 other cards Only one copy of any card, except basic lands All cards must be in the color identity of the commander THE GAME 2–4 players Free-for-all multiplayer format Start with 40 life All commanders start in their command zone Take turns in clockwise order Last player standing wins TERMS TO KNOW COLOR IDENTITY A card’s color identity can come from any part of that card, including its casting cost and any mana symbols in its text. Every card in your Commander deck must only use mana symbols that also appear on your commander. Colorless cards are allowed as well. COMMAND ZONE This is where your commander resides during the game when they are not in play. At the start of the game, each player puts their commander face up into the command zone. A commander can be cast from the command zone for its normal costs, plus an additional two mana for each previous time it’s been cast from the command zone this game. If your commander would be put into your library, hand, graveyard or exile from anywhere, you may return it to your command zone instead. COMMANDER DAMAGE A player that’s been dealt 21 or more combat damage by the same commander over the course of the game loses the game. The commander is tracked across zone changes for this purpose (for example, if one player takes control of another player’s commander, any damage that commander already dealt is still counted). SIDEBOARD OR OUTSIDE OF THE GAME Abilities which bring other card(s) you own from outside the game into the game (such as Living Wish; Spawnsire of Ulamog; Karn, the Great Creator) do not function in Commander.

POINT SYSTEM Positive (Green) To Mount Doom: Destroy or Exile a Sol Ring an opponent controls (+1) Crumbling Sanctuary: Be the first to have 10 or less cards in your library (+2) Prolific: Control 10 or more creature tokens (+1) Figurehead: Finish the game without your general leaving the Command Zone (+3) Tribal Allegiance: Control 7 creatures that share a creature type (+1) Legends Rule!:Control 5 or more Legendary creatures (+2) Super Friends: Control 3 or more planeswalkers (+1) Equipped for Battle: Equip a creature with 4 or more equipments (+1) Endurance: Have 60 or more life (+1) The World Spell: Control 5 or more non-aura enchantments (+1) Boundless Realms: Control 25 or more lands (+1) Necropotence: Cause yourself to lose 20 or more life in one turn (+2) Third Time’s the Charm: Resolve your general from the command zone 3 times (+1) First Blood: Be the first to deal damage to an opponent (+1) General Death: Eliminate a player with commander damage (+1) Fateful Hour: Eliminate an opponent while you have 5 or less life (+1) First Out: Be the First player Eliminated (+2) Enchanted for Victory: Attach 4 or more auras to the same creature (+1) Variety: Use a spell or ability to win the game and / or cause an opponent to lose the game without invoking state based actions (+1) Negative (Red) Armageddon: Resolve an effect that destroys , exiles, or returns to hand all lands that at least one opponent controls (-1) That’s Not Very Fun: Eliminate a player before the 5th turn of the game (-4) No Time For Anyone Else: Take more than two turns in a row. Lose one point for each turn after the second (-) Bitter Victory: Eliminate a player with damage from a source of infect (-1) Back to the Beginning: Restart the game or start a Subgame (-1) Infinite Combo: Perform a series of spells, abilities and /or triggers more than four times in one turn. Lose one point for each iteration after the fourth (-) Cranial Explosion: Cause yourself to draw more than 30 cards in one turn. Lose one point for each card after the 30th (-*) Becoming the Archenemy: Eliminate multiple opponents during a single turn without an effect causing you to win the game (-3) Participation (Yellow) Victory: Eliminate a player (+1) Participation: Take part in a EDH League game (+1) BANNED CARDS 25 cards with the Card Type “Conspiracy.“ 9 cards that reference "playing for ante.” Ancestral Recall Balance Biorhythm Black Lotus Braids, Cabal Minion Channel Chaos Orb Cleanse Coalition Victory Crusade Emrakul, the Aeons Torn Erayo, Soratami Ascendant Falling Star Fastbond Flash Gifts Ungiven Griselbrand Imprison Invoke Prejudice Iona, Shield of Emeria Jihad Karakas Leovold, Emissary of Trest Library of Alexandria Limited Resources Lutri, the Spellchaser Mox Emerald Mox Jet Mox Pearl Mox Ruby Mox Sapphire Panoptic Mirror Paradox Engine Pradesh Gypsies Primeval Titan Prophet of Kruphix Recurring Nightmare Rofellos, Llanowar Emissary Shahrazad Stone-Throwing Devils Sundering Titan Sway of the Stars Sylvan Primordial Time Vault Time Walk Tinker Tolarian Academy Trade Secrets Upheaval Worldfire Yawgmoth’s Bargain 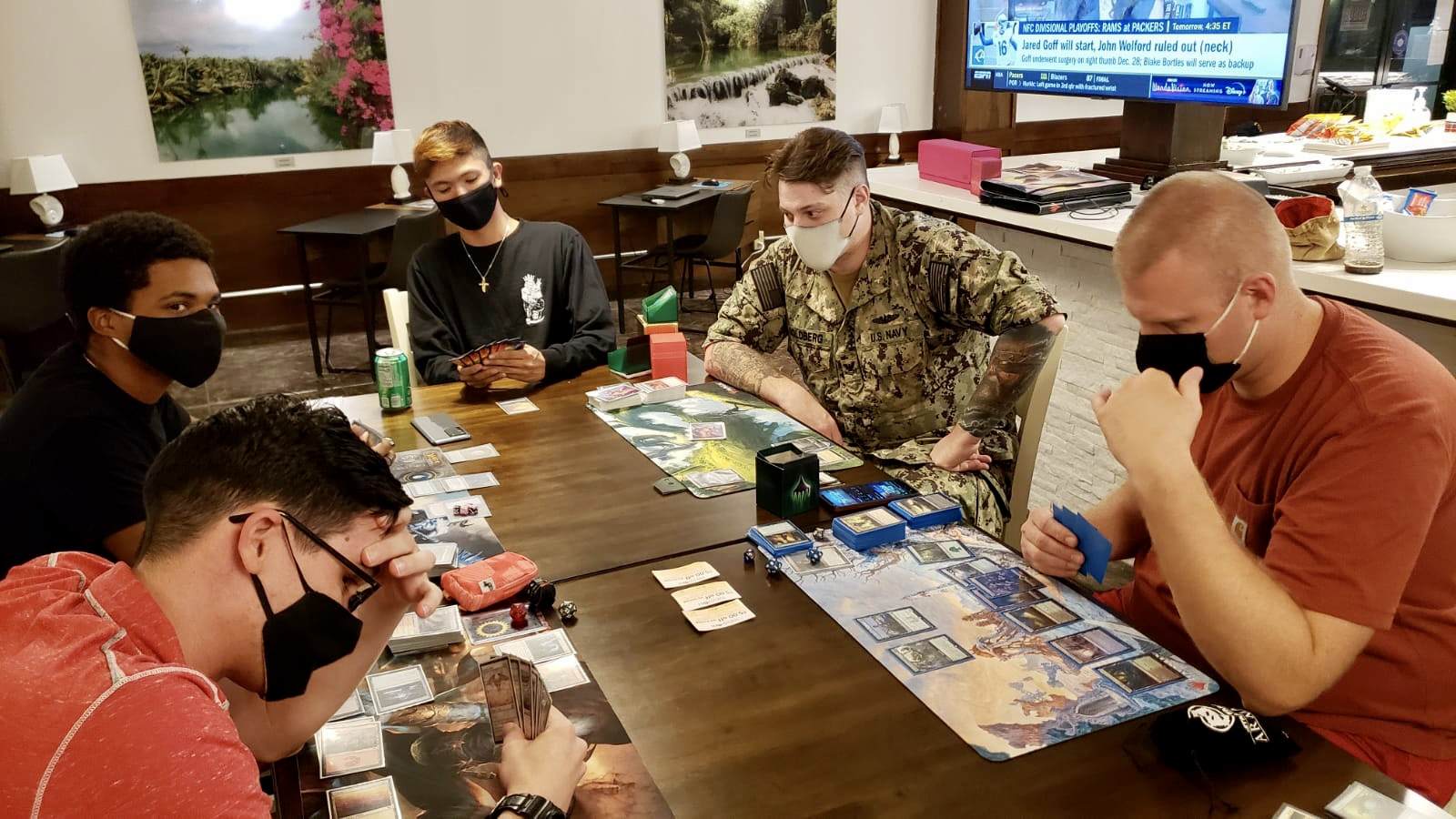 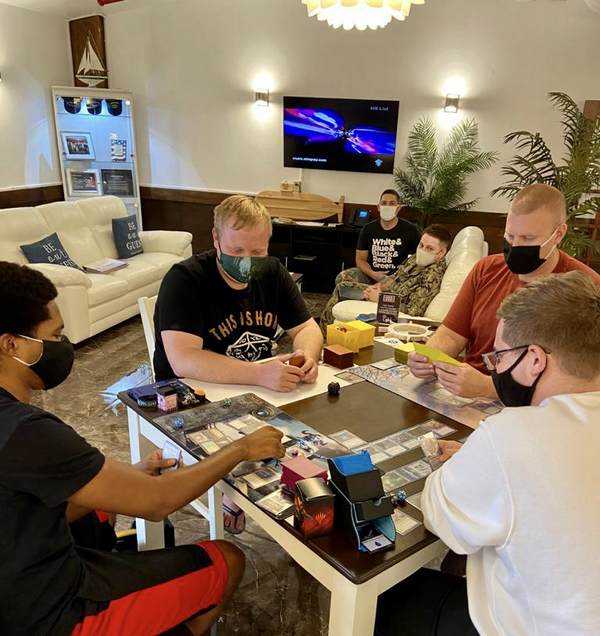 Programs at this Location